Conflict and geo-economic tensions have triggered a series of deeply interconnected global risks, according to the World Economic Forum’s Global Risks Report 2023. These include energy and food supply crunches, which are likely to persist for the next two years, and strong increases in the cost of living and debt servicing. At the same time, these crises risk undermining efforts to tackle longer-term risks, notably those related to climate change, biodiversity and investment in human capital.

The Global Risks Report 2023 argues that the window for action on the most serious long-term threats is closing rapidly and concerted, collective, action is needed before risks reach a tipping point.

The report, produced in partnership with Marsh McLennan and Zurich Insurance Group, draws on the views of over 1,200 global risk experts, policy-makers and industry leaders. Across three timeframes, it paints a picture of the global risks landscape.

At present, the global pandemic and war in Europe have brought energy, inflation, food, and security crises to the fore. These create follow-on risks that will dominate the next two years: the risk of recession; growing debt distress; a continued cost of living crisis; polarized societies enabled by disinformation and misinformation; a hiatus on rapid climate action; and zero-sum geo-economic warfare.

Unless the world starts to cooperate more effectively on climate mitigation and climate adaptation, over the next 10 years this will lead to continued global warming and ecological breakdown says the report. Failure to mitigate and adapt to climate change, natural disasters, biodiversity loss and environmental degradation represent five of the top ten risks – with biodiversity loss seen as one of the most rapidly deteriorating global risks over the next decade. In parallel, crises-driven leadership and geopolitical rivalries risk creating societal distress at an unprecedented level, as investments in health, education, and economic development disappear, further eroding social cohesion. Finally, rising rivalries risk not only growing geo-economic weaponization but also remilitarization, especially through new technologies and rogue actors.

The top ten risks identified in the Global Risks Report 2023 are as follows: 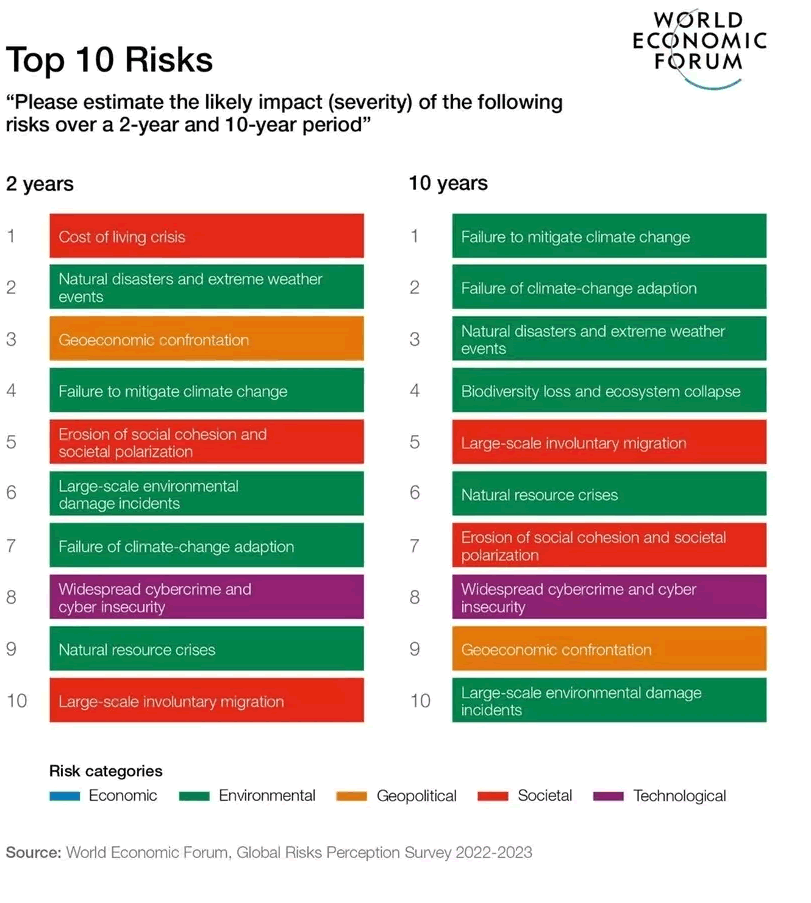