There are significant differences in risk perceptions across the eight regions covered in the World Economic Forum’s new Regional Risks for Doing Business report. Over 12,000 executives highlighted concerns ranging from economic to political, societal and technological.

Failure of national governance ranked number one in Latin America and South Asia, highlighting the costs of political strains that have been evident in much of the world in recent years.

In the energy-rich regions of Eurasia and Middle East and North Africa, energy price shocks were ranked as the top risk to doing business.

Unemployment was perceived as the top risk for doing business in sub-Saharan Africa, representing mostly the absence of demand in the region.

“Given the current geopolitical uncertainty globally, cooperation within and among regions is of critical importance. Understanding the evolving risks in different regions is therefore top of mind for business leaders,” said Mirek Dusek, Deputy Head of Geopolitical and Regional Agendas and Member of the Executive Committee at the World Economic Forum.

“By drilling down to regional and country-level data, this new Regional Risks for Doing Business report allows us to gauge how risk sentiment is evolving around the world. Cyber attacks are increasing in prominence, but it is striking how many business leaders point to unemployment and national governance as the most pressing risks for doing business in their countries,” said Aengus Collins, Head of Global Risks and the Geopolitical Agenda at the World Economic Forum.

The top five risks of doing business by region: 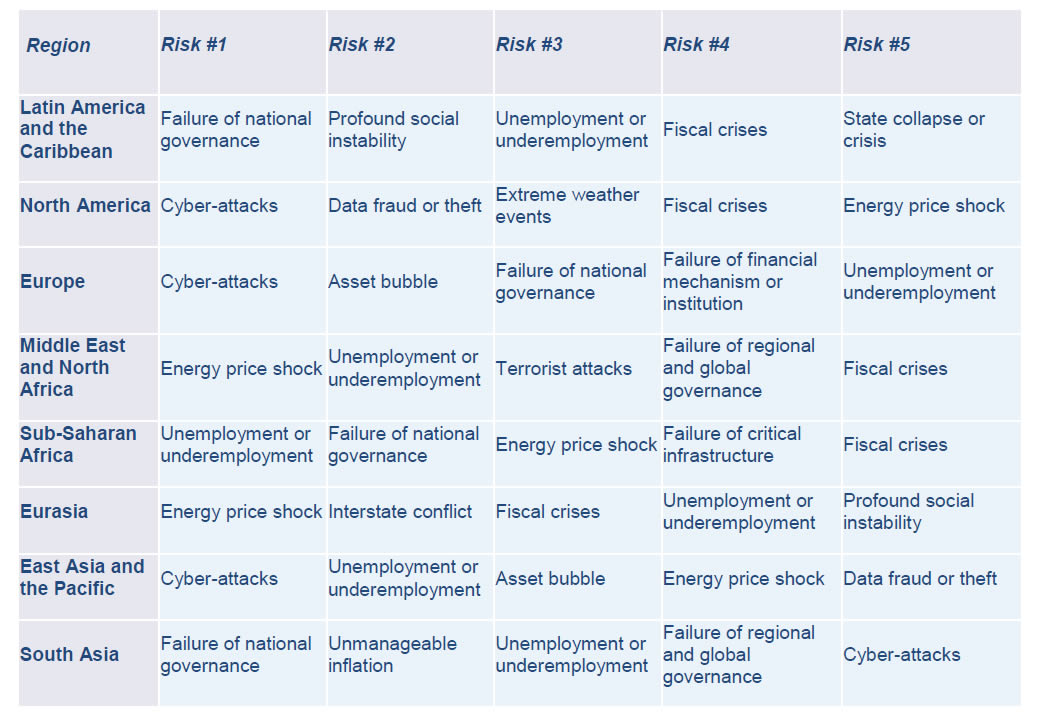 The findings of the Regional Risks for Doing Business report are based on 12,548 responses from executives in 140 economies. Respondents were asked to select “the five global risks that you believe to be of most concern for doing business in your country within the next 10 years”. This question is included in the annual Executive Opinion Survey, which is a part of the World Economic Forum’s Global Competitiveness Report. The latest edition of the survey was carried out from January to June 2018. Business leaders were asked to choose up to five risks from a list of 30, including terrorist attacks, extreme weather events and state collapse or crisis