Industry disruption affects the majority of companies: and can be prepared for

A new study from Accenture has found that industry disruption is a reality for most large companies globally. The study shows that, rather than being a random event beyond business leaders’ control, disruption has a pattern that can be identified, understood and prepared for.

The study analyzed more than 3,600 companies with annual revenues of at least US$100 million in 82 countries along two dimensions: current level of disruption, and susceptibility to future disruption.

As part of the research, Accenture developed a ‘disruptability index’ by dissecting disruption into its key components. The researchers took into account the presence and market penetration of disruptor companies as well as incumbents’ financial performance, operational efficiency, commitment to innovation, and defences / defences against attack.

Business leaders can use the index to understand where their industry is positioned and why. It allows them to identify risks and opportunities – and then prepare the right strategic response. Accenture applied the index to position companies in 20 industry sectors and 98 sub-segments across four periods of disruption: 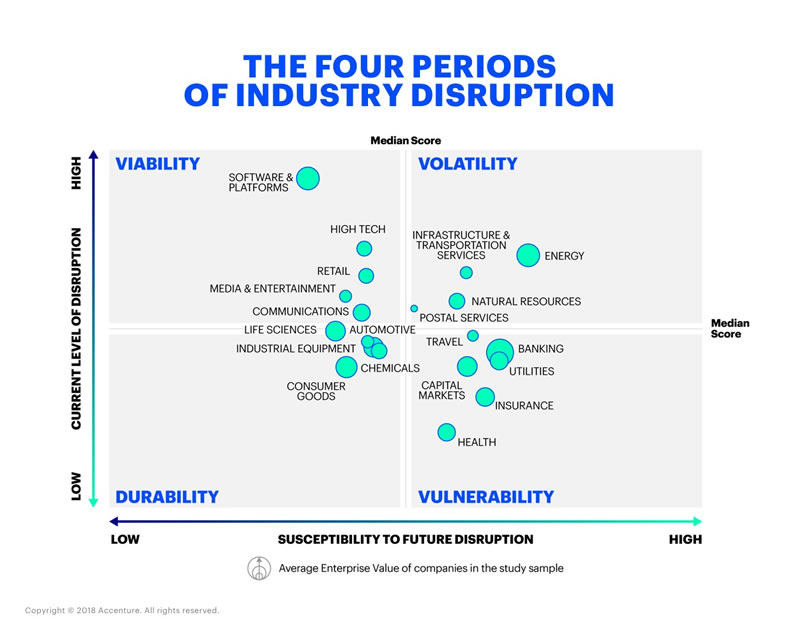 Durability: Disruption is evident but not life-threatening; incumbents still enjoy structural advantages and deliver consistent performance. One-fifth (19 percent) of companies – including those in the automotive retail and supply, alcoholic beverage and diversified chemicals industries  – fall into this period.

Vulnerability: The current level of disruption is moderate, but incumbents are susceptible to future disruption, due to structural productivity challenges such as high labor / labour costs. One-fifth (19 percent) of companies – including those in the insurance and healthcare industries and the convenience retail sector – fall into this period.

Volatility: Prominence of violent, sudden disruption; traditional strengths have become weaknesses. Companies in this period (25 percent of companies studied) include those in the consumer technology, diversified banking, advertising and transportation services industries.

Viability: Disruption is a constant; sources of competitive advantage are often short-lived, as new disruptors consistently emerge. More than one-third (37 percent) of companies – including software and platform providers; telecommunications, media and high-tech companies; and automotive manufacturers – fall into this period.

“Disruption is continual and inevitable – but it’s also predictable,” said Omar Abbosh, Accenture’s chief strategy officer. “Business leaders need to determine where their company is positioned in this disruption landscape and the likely speed of change. The more clearly they see what’s changing around them, the better they can predict and identify opportunities to create value from innovation for their business and rotate to the ‘new’.”

According to the report, each period of disruption also requires a distinct strategic response:

In the durability state, companies must reinvent their legacy business rather than focus on preserving it. This means taking steps to maintain cost leadership in their core business and make key offerings more relevant to customers by, for example, making them not only cheaper but also better.

In the vulnerability state, companies must make their legacy businesses more productive to position themselves to develop and leverage future innovations, both their own and their competitors’. For example, they should look to reduce dependence on fixed assets and monetize underused assets.

In the volatility state, the only way to survive is by decisively but wisely changing the current course. Incumbents need to radically transform the core business while scaling new businesses. But pivot too quickly, and they will likely stretch themselves too thin financially; pivot too slowly, and they risk becoming obsolete.

In the viability state, companies need to embrace a constant state of innovation. This involves increasing the penetration of innovative offerings with existing customers and aggressively expanding into adjacent or unchartered markets by leveraging the strength of their reinvigorated and innovation-enabled core business.

“To not only survive disruption but thrive when it strikes requires companies to transform and grow their core business while simultaneously innovating to create and scale new businesses,” said Mike Sutcliff, group chief executive of Accenture Digital. “Embracing digital is crucial part of it. We found that the lower an industry’s digital performance, the more susceptible it is to future disruption. Digital technologies can help make a company more resilient in times of disruption in a number of ways, whether by driving better outcomes from existing products, developing entirely new digital services, lowering costs, or increasing barriers to entry.”